in New Mexico up 121,516 ft (23 miles=37 km) above the Earth as part of the Cubes in Space Program. Their experiments had to fit it a cube just 4 centimeters by 4 centimeters!
“The Jet Propulsion Laboratory (JPL) Remote payload from NASA’s Scientific Balloon Launch Site at Fort Sumner, New Mexico. The JPL Remote mission is the third of six planned launches during this year’s fall balloon campaign in New Mexico. JPL Remote is an upper atmosphere research experiment that will help us better understand stratospheric chemistry and the stability of the ozone layer. The payload took flight on a 29.47-million-cubic-foot scientific balloon that, when fully inflated, is roughly the size of 99 blimps.

The approximately 3,000-pound balloon technology payload is testing and validating a new balloon film. Also, the flight will test a new solar power system and a new rotator, which is used to orient payloads. 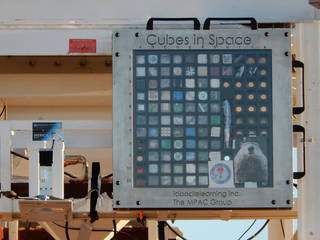 Additionally, the test flight gondola is sporting a number of missions of opportunity to include Cubes in Space, which contains dozens of small individual experiments developed by students across the nation aged 11-18.

A couple of missions of opportunity, or piggyback payloads, took flight on a balloon technology test flight at 8:20 a.m. MDT, Sept. 28.

The JPL Remote payload is an upper atmosphere research experiment that will help scientists better understand stratospheric chemistry and the stability of the ozone layer.

This site uses Akismet to reduce spam. Learn how your comment data is processed.